Welcome to Salty Cove! The ultimate place for pre-schoolers to have freedom and fun! 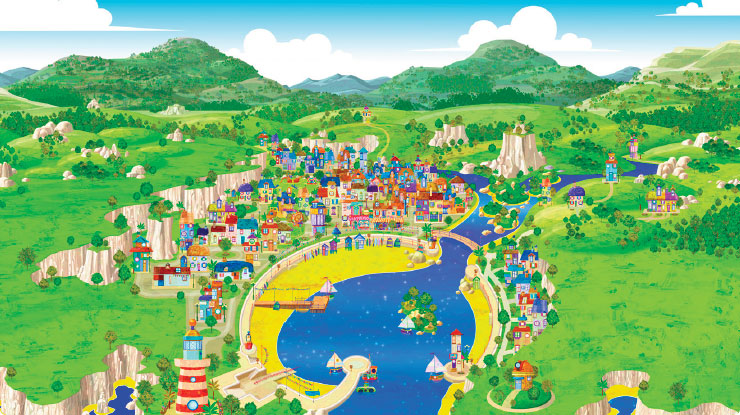 “’Pip Ahoy’ aims to bring fun and laughter into every home with its mixture of the extraordinary and the familiar. Pip and his friends will carry out a rescue here, solve a problem there, taking care of their close-knit community and looking out for others. But this is not to say that the show is anything but warm, boisterous, silly and fun.”

Meet Pip, the curious, confident and creative young puppy at the heart of this show – he has free reign of Salty Cove, a perfect seaside town, where everyone knows him, and his three best friends. They’re an intrepid bunch of explorers!

Salty Cove boasts everything a proper seaside resort should have: a sandy beach with little coves and pools to visit, a row of welcoming beach huts and above this, the sunny promenade with its parade of shops. To one end of the cove is an observatory manned by the brainy and erudite Professor Evie, proud owner of a submarine; a craft well-suited for adventuring beneath the clear blue waves. To the other end a lighthouse stands overlooking a boatyard, which contains several crafts of various shapes and sizes. Some of these belong to the redoubtable Captain Skipper. A broad river, dotted with small islands runs into the bay at the centre of which is another large island. Salty Cove is the perfect place for exploration, adventure and more fun that you can shake a stick of rock at!

All that’s cosy and comfortable sits right alongside the extraordinary and absurd, in the unique seaside town Salty Cove, giving Pip and his friends the freedom to roam in a place where adventure is promised but safety assured. But Salty Cove never stays the same. It is bursting with life!

By land, sea and sky, you can’t help but be irresistibly drawn to this colourful spot – and all the adventures it offers. Pip’s adventurous, happy-go-lucky and every-eager to help out is always first on the case with his Scopey Eye when a new boat docks at the harbour or The Bubble Train comes into view. He and his best friend Alba are the hub around which the stories revolve. Alba is a kitten of about the same age. And, being of the female persuasion, is perhaps a little more thoughtful than he.

Everyone wants their holiday adventure in the Cove and we mean everyone… Mice Pirates, Mr Alby Tross, the crackpot Puffins and even Alan the penguin.